Arlington County will commemorate the lives lost in the Sept. 11, 2001, terrorist attacks, and express gratitude to all those who responded that day with a virtual event. To ensure everyone’s safety during the COVID-19 pandemic, the public will view the event online or on the County’s cable channels. 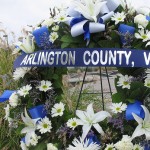 The program will begin at 9:30 a.m. Friday, Sept. 11. It will include the presentation of Colors by the Arlington County Public Safety Combined Honor Guard and the laying of a wreath at the Bozman Government Center.

A moment of silence will be held at 9:37 a.m., the minute when the plane struck the Pentagon and 184 lives were lost.

Streamed live on the County website, YouTube channel, Facebook Page. The ceremony can also be viewed on the County’s cable channels (Comcast channel 1085 or Verizon channel 39).

The Pentagon Memorial commemorates all who died on Sept. 11, 2001, when terrorists slammed American Airlines Flight 77 into the Pentagon. Fifty-nine passengers and crew on board the plane lost their lives that day, along with 125 military and civilian personnel at the Pentagon. They were among the nearly 3,000 people killed in attacks on the Pentagon, the World Trade Center and on a plane that crashed in Shanksville, Pa., that day.

To commemorate the events of Sept. 11, Arlington County encourages all property/home owners/tenants to display an American flag during the week of Sept. 11.

In 2009, the President of the United States formally designated Sept. 11 as a National Day of Service and Remembrance and called upon the people of the U.S. to participate in community service in honor of those lost. Visit Volunteer Arlington and find a volunteer opportunity that is a good fit for your skills, interests, and abilities – one that will empower you to make a meaningful impact in our community.

Arlington first responders managed the incident command and response to the 9-11 attack on the Pentagon. The U.S. Department of Justice hailed the County’s management of the response, and the 9-11 Commission called Arlington’s performance a “model for the nation.”

“The response to the 9-11 terrorist attack on the Pentagon was mainly a success for three reasons,” the 9-11 Commission concluded in its final report: “First, the strong professional relationships and trust established among emergency responders; second, the adoption of the Incident Command System; and third, the pursuit of a regional approach to response.”